The activists and communities telling a new story about outdoor access 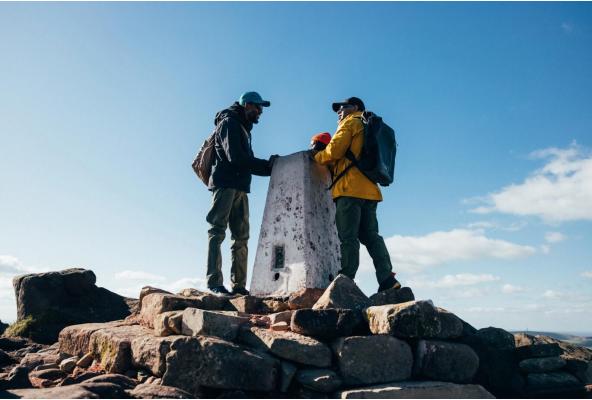 Right to Roam is our new campaign, in collaboration with fellow B Corp Finisterre, aimed at enabling a more accessible and welcoming outdoors. This blog spotlights two communities telling a new story about who the outdoors is for.

In 2020, as the pandemic took hold, Marlon Patrice received the devastating news that his son had been killed in a knife attack.

Two years later, Marlon says nature has helped him process the trauma. “It gives you a chance for that thought process,” he reflects. “What can I do next? How can I move forward? It just gives you that space to think.”

Marlon’s outdoor experiences have been so powerful that he felt compelled to help others in his Birmingham community heal by reconnecting with nature. Before he knew it, casual outings with friends turned into We Go Outside Too (WGOT), a thriving CIC helping hundreds of people of colour find joy and healing, individually and collectively.

“There are two sides to this healing,” Marlon says. “Spending time in these green spaces is one side, but it’s also about passing it on to the community. When you see people’s eyes and their reactions when they go out and experience it for themselves, it’s amazing. You can see that it’s healing.” This healing spreads, he says. “It leaves you feeling happier, and then you bring it back to the city and it trickles down. People are wondering why you’re so happy! And then you share with them why, and you pass it on.”

Seren Jones also knows this healing. “Running through the marshes with my earphones is just the best feeling,” she says. “It’s peaceful. It’s quiet. It allows me to come back to my roots.” Swimming gives her a similar calm. “When I leave the water, it’s almost like a reset, because I feel at peace with all my uncertainties.”

This is partly why Seren co-founded the Black Swimming Association (BSA), a charity working to ensure that people from African, Caribbean and Asian backgrounds have safe, quality experiences in and around water. The BSA works with partners across the aquatic sector to increase awareness of water safety and the health benefits of swimming.

95% of black adults and 80% of black children in England do not swim. Relatedly, the WHO reports that the risk of drowning is higher among minority ethnic communities. “The structures aren’t in place to encourage people who look like us to feel like they belong in that space,” Seren says. “So we started the BSA to change that.”

WGOT and the BSA are both founded on twin beliefs. First, that time in nature improves our health and wellbeing. Second, that Marlon and Seren’s communities face unacceptable barriers to access, which must be dismantled.

Physical access is one barrier. Minority ethnic communities are more likely to live in urban environments, far from National Parks and often with little green space nearby. “The inner city can become so heavy at times, so it’s about having that place to switch off,” says Marlon. Although small green spaces are important - Marlon describes a local green patch “plonked in the middle of a dual carriageway” as his “little solace” - open countryside and wild terrain offer the most powerful medicine.

Discrimination also deters people. “We  also get stared at while out on the walks,” says Marlon, even though “once a conversation starts we find that we share the same things in common … the same  joys and health benefits that the outdoors brings.” But working through that feeling of standing out, of not being welcome, takes energy.

Feeling geographically distant or socially unwelcome creates further barriers. Many inner-city folk, Marlon says, aren’t sure what kit they need when outdoors. More worryingly, many people of colour feel they simply don’t belong in outdoor spaces - even local ones. The BSA meets at a swimming pool in Hackney, a London borough with a 40% BAME population. Yet, Seren says, before their first visit, “a few of [the swimmers] admitted that they didn’t think that space was for them.”

People feeling unwelcome in outdoor space is unacceptable, let alone spaces in their own communities. Seren is passionate about changing this. “Not only are we encouraging people to get in the water, pick up a hobby, get healthier and reap the many benefits that swimming has to offer … I feel like we’re opening up this world to people who never thought it was an option for them.”

Outsiders opening up the outdoors to everybody deserve our support. This is why we launched Right to Roam, and why we’re proud to be a founding member of a soon-to-be-announced platform supporting amazing outdoor activists working to make nature accessible to all. Stay tuned! And, in the meantime, get involved with Right to Roam and follow the incredible work WGOT and the BSA are doing.

FIND OUT MORE
SHOP THE COLLECTION