Championing the Right to Roam 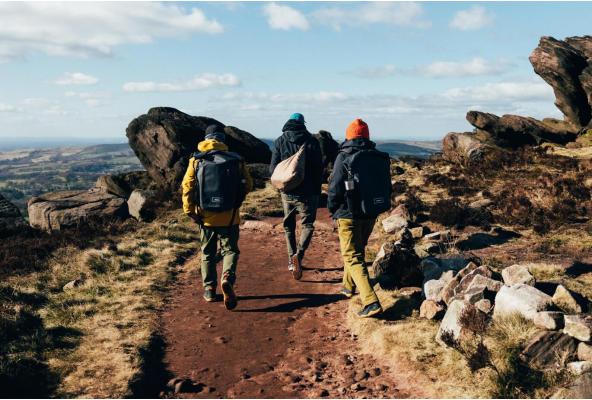 Right to Roam is our new campaign, in collaboration with fellow B Corp Finisterre, aimed at enabling a more accessible and welcoming outdoors. This blog outlines the ugly truth about how much land is publicly accessible, and explains how you can support the campaign.

Imagine if your favourite landscape were a maze. Not a fun maize maze, but a single passable trail sneaking its way through a labyrinth of dead ends. Uncertainty would lurk at every corner. Some would reveal an open path and a friendly face, but many a shotgun-toting gamekeeper. And most routes would end, silently, at ‘Private: no entry’ signs.

The right to roam exists to avoid this dystopia (even if it already feels somewhat recognisable). The right to roam is our right, as the general public, to access and enjoy land. Usually it’s considered a legal right, varying from place to place. In the US, for example, although policies vary between states, around 28% of land is freely accessible, held in public trust by the federal government. In England and Wales, the 2000 Countryside and Rights of Way Act (CROW Act) grants public access to about 8% of land (mountains, moors, commons, downlands, heaths and coastlines).

Unsurprisingly, many Scandinavian countries have the most progressive rights of way, allowing people to roam across even private land, albeit with responsibilities to follow laws and respect the environment. The Finnish concept of jokamiehenoikeus, for instance, allows people to access all land except private gardens or the immediate vicinity of people’s homes.

In most places the right to roam is ancient, but hard fought. Most famously, in the UK, the 1932 mass trespass of Kinder Scout, a moorland plateau in the Peak District, saw working-class ramblers assert their right to access land reserved for rich landowners. Five trespassers were jailed, and the trespass - which celebrates its 90th anniversary on April 23rd - helped pave the way for the 1949 National Parks legislation, the creation of long-distance trails and, ultimately, the CROW Act. It remains a celebrated chapter in right-to-roam folklore.

Today, outdoor activists in the UK are continuing the fight, campaigning to extend rights of way to include some of the 92% of land currently off public limits (except to trespassers), and to save over 49,000 miles of paths at risk of being lost to the public forever.

But the right to roam is cultural as well as legal. Even with hard-fought legal protections, many people still feel unwelcome outdoors, having grown up believing outdoor spaces aren’t for them. There are many barriers. People of colour or people with low incomes are less likely to have physical access to green spaces. There is also a lack of representation in outdoor spaces (over 99% of UK National Park board members are white), many of which are also pocked with estates funded by enslavement. And discrimination only deepens the problem.

This must change. The health benefits of time in nature are astonishing. And we all know the feeling of caring about the things we love. With better access to and knowledge of the natural world, more and more of us will fight to protect it.

Everybody deserves the opportunity to reconnect with the wild. Our health, and Earth’s health, depend on it.

All outdoor lovers and stewards have a role to play - especially those with resources to help. This includes Vivobarefoot and Finisterre: two established outdoor brands passionate about reconnecting with nature and committed to more diverse outdoor access. This is why we’re launching Right to Roam.

So what does the campaign look like in practice?

Firstly, we’re celebrating and amplifying communities stepping up, stepping out and telling new stories about who the outdoors is for. You can read about two of those communities here.

Secondly, we’re curating a series of outdoor opportunities,  workshops and retreats to educate and agitate around outdoor access. We’d love for you to join our newsletter or follow us on Instagram to hear first about when these launch.

We’re also proud to announce (well, tease…) that we’re both founding members of a soon-to-be-launched support platform for changemakers working to make the outdoors accessible to all. Stay tuned!

And, of course, we’re doing what we do best: providing sustainable kit  to get you moving outdoors. We think you’ll love our collaborative Right to Roam range.

Right to Roam, like the outdoors, should be for everyone. So join us! Surf riders and urban outsiders, barefoot newcomers and feeling unwelcomers: this is for you, wherever you come from. Be welcome, and help us welcome others.

FIND OUT MORE
SHOP THE COLLECTION