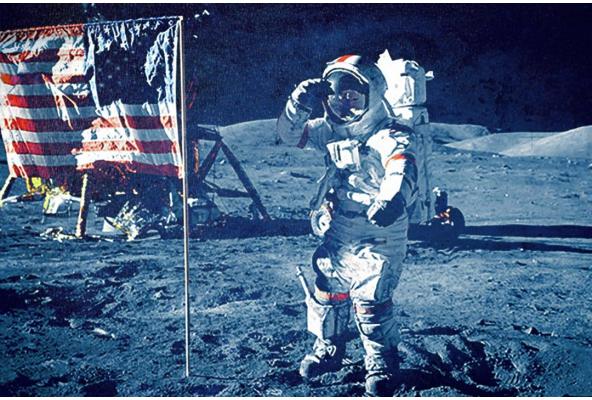 If you haven’t noticed from all the news recently, this year marks the 50th anniversary of the Apollo 11 moon landing where a certain Neil Armstrong (not to be confused with Lance, the incredibly fast cyclist) stepped out of his tinfoil moon-lander with the whole world sitting on the edge of their comfy sofas, watching on their black and white screens in awe...‘One small step for man, one giant leap for mankind..!’

Photo by NASA on Unsplash

At that moment; 1969, America, the free world had won the space race and the stars and stripes flag was a stake in the lunar soil. Perhaps man’s ultimate achievement, and a story of human endeavour that continues to rouse the imaginations of the next generations of scientists, engineers, designers, explorers and marketeers alike!

A short three years after Neil did the moon walk and 10 years before Michael Jackson did his, in reverse, one of the most iconic brands of our generation released the ‘moon shoe’ which last week sold at auction for a staggering $437,500; and in doing so shattered the resale records for sneakers. But peel back the layers and there is more to this sneaker than your average sneakerhead might think…

The Moon Racer was designed in 1972 by Nike co-founder, shoe innovator, track and field coach and legend in his own right, Bill Bowerman and they were worn in that year’s Olympic marathon trials by Bruce Mortensen. The super thin sole was made by Bill, who famously poured rubber into his wife’s kitchen waffle iron to reduce weight and give the extra grip he was looking for. It was later said the shoe got its name after its signature waffle tread resembled the footprints the astronauts left behind on the moon.

Meanwhile the earlier release of Bill’s best-selling book ‘jogging’ in 1967 had started to spread across sedentary middle America, inspiring the urban masses to get off their butts, put on a pair of Phil and Bill’s lightweight sneakers and start ‘jogging’. America was moving again, and this was great for business, but as the pavement pounding continued so did the various types of injuries reported as a result. This wasn’t good news and as the story goes; during a meeting with ‘medical professionals’, Bill and his team (Mike Friton, a former Nike designer, talks of this moment in our short documentary Shoespiracy) would unknowingly change the template of sneaker design and the shape of people’s feet for ever!

Bill and his team chose to raise the heel and introduce underfoot padding because most people – both men and women - were spending their days in dress heels and the transition to flat sneakers was too much, too soon. With the best intentions, he agreed to add the first cushioned midsole with the goal of making the perfect shoe for the jogging masses to plod along in.

The official Waffle Trainer: released in 1974 was the evolution of the Moon Shoe from 1972.

The padded waffle trainers were a hit and the rest of the industry followed adding stiffer counters, more sole stability, thicker soles and the more that sales grew, the more they added, and added, and added…. America’s more-is-more consumer culture took over the world and a multi-billion-dollar trainer industry boomed. Cushioned soles were at large and ‘less is more’ was officially dead.

The Padded evolution of the modern shoe

Reminiscent of the original, with the modern comfort of the Nike react foam derived from the latest underfoot technology recently developed to try and break the 2.00-hour Marathon

Ever since we saw humans in space suits bouncing on the moon we have been obsessed with technology and underfoot bounce. But despite the technological developments in modern running footwear up to present day, up to 79% of runners today get injured in a given year.[1]

Since 1972, the truth is that with the best intentions, modern shoe design has put a lot of energy and money into fixing problems that don’t need fixing. Ever stopped to think that you’re likely buying shoes that along with our modern cushioned and sedentary lifestyles, may have caused the problems in the first place?

The human foot in itself is an unrivalled bit of kit, packed with all the natural technology you need. It has evolved over millions of years to do an amazing job in everything from walking and running, to jumping and dancing. But by cramming it into a modern shoe, packed with all the latest underfoot technology, you actually negate its amazing natural function and over time you will lose the majority of its supernatural performance too.

Let's break it down; A thick RIGID SOLE restricts the foot’s free range of movement. The ELEVATED HEEL and arch support robs you of the natural shock absorption and energy return in your ligaments and tendons. TOE SPRING puts your toes out of the game and compromises your stability and messes with your natural gait. Finally, all that unnecessary CUSHIONING is not only making your feet weaker, but it’s also getting in the way of the vital sensory feedback loop between your feet and brain which is key to natural, injury-free movement. Simply put; if you don’t use it (your foot) you’ll lose it (healthy movement)!

WALK BEFORE YOU RUN

The foundation of skilful movement starts with the sensory feedback you receive from your feet. Take away that vital sensory connection with a pair of cushioned shoes when running, and this can cause problems. Simply put your brain isn’t getting the information it needs to make the right kind of body shapes to deal with the increased forces - which can result in injury.

So If you’re thinking of trading in your space aged foam kicks and coming back down to earth in a shoe like the more minimal original moon shoe that lets your feet feel the ground (under gravity), then remember; you’re essentially re-learning, re-aligning and reconnecting your natural body and movement brain which takes a little getting used to. So it’s important to TAKE YOUR TIME while you’re getting that sensory motor loop fired up again and your feet back to their strong and mobile natural glory. Just as the old saying goes you need to ‘walk before you can run’.

– Relaxation (movement is a subconscious skill that should be in your animal brain – relax and enjoy!)

Don’t worry too much about foot strike - If posture, rhythm and relaxation are on point then foot strike will take care of itself.

Check out our Shoespiracy Documentary for more information and head to  https://www.vivobarefoot.com/science for some tips for Healthy Feet to help you on your journey to healthy natural movement...on earth. Not the moon!