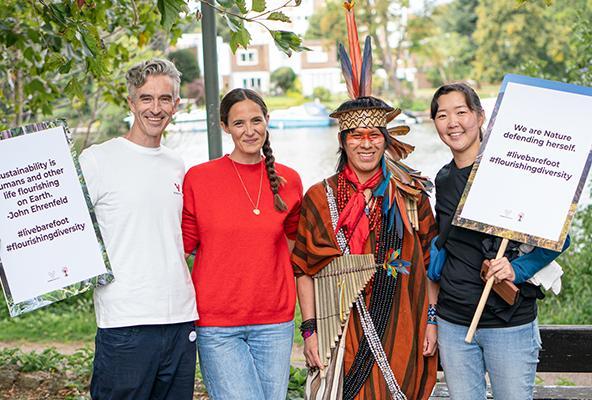 This month Vivobarefoot had the honour to participate in a series of events to listen and learn from indigenous leaders from all around the world.  The Flourishing Diversity Series promoted the idea of creating cultural preserves for indigenous people all over the world.  The first event of its kind in London.

Indigenous peoples’ territories govern or manage 65% of the earth’s land area[1] and are estimated to host 80% of the world’s biodiversity.[2] Yet until now, these communities have barely been acknowledged for their presence or their role in the environmental crisis.

Vivobarefoot founder Galahad Clark along with Baroness Lola Young of Hornsey and Paul Van Zyl, creative director of the Conduit, joined a Listening session by Ju/’Hoan (San) leader Mr.ǂOma Tsamkxao, who established the first internationally recognized land conservancy in Namibia where Vivobarefoot has established the sandal making workshop with the Ju/’Hoan community and Future Footwear Foundation in 2017.

The deep wisdom and profound messages of peace and preservation from the Ju/’hoan (Khoisan) along with the other indigenous leaders are so valuable, especially when our whole humanity stands in solidarity with the next generation led by Greta Thunberg reminding us that we have reached a moment of action that will set a path for future life on earth.

Amongst many profound quotes, Jerome Lewis, Director of Centre for the Anthropology of Sustainability, UCL and organiser of the Flourishing Diversity Series, said:

“We are living through a crucial moment in the history of our planet. Human activity has profoundly altered our climate and the environment, while modern lifestyles have disconnected us from our planet, other species and each other.

“Communities of people living in indigenous ‘wisdom traditions’ offer us inspiration to guide the changes we urgently need to make. In contrast to modern lifestyles, theirs are critical to biodiversity and the future of the planet.”

“Modern industrial civilisation is destroying a way of life that has existed for thousands of years. Nature is not a resource for the economy. Nature is a source of life.”

As a company with sustainability in the heart of the organisation, we will continue to create products and experiences literally bringing people closer to nature.   We are so grateful to Flourishing Diversity for being a part of the exchange and supporting the work in elevating these most important voices at this critical time.

Read an accompanying report, ‘Flourishing Diversity: Learning from Indigenous Wisdom Traditions’, that provides more detail about the challenges we face, while seeking to inspire appreciation for the vital role Indigenous people play on the front line of resistance.

TIME Magazine – 'It Is Our Very Governments Who Are Killing the Earth.' A Brazilian Indigenous Leader Speaks Out On Deforestation in the Amazon, Benki Pyanko, as told by Suyin Haynes