RESTORE IT – AND THEY WILL COME 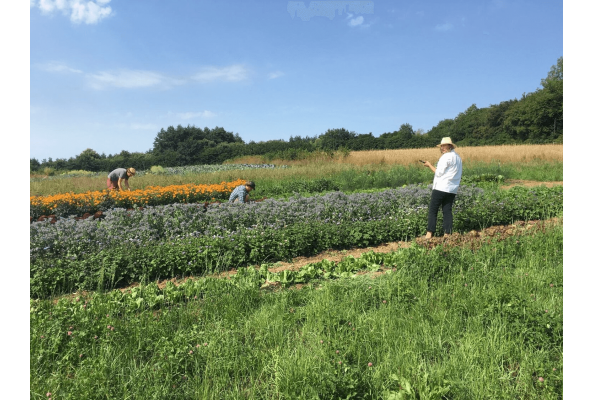 “Knowledge is power,” says Rachel Phillips, an educator at Devon’s Apricot Centre. “And through the funding we receive, in part supported by the Livebarefoot Fund, we’re challenging what the idea of a farmer is.”

We’re nestled among a patchwork of woodland, meadows and crops. Rachel describes the centre as a beacon, a place that teaches people how to care for the land, and themselves. It’s one of the 15 projects funded by the Devon Environment Foundation (DEF). Rachel’s role is as a Nature Practitioner – together with her colleagues, Apricot creates a web of interconnection through the land and surrounding communities.

In turn, DEF is part of a larger family of Foundations, the Conservation Collective, safeguarding and restoring environments around the world.

Rachel’s office has an enviable view. Drifts of borage, buckwheat and sunflowers waft in the early September breeze. The busy hum of insects fades in and out. Rachel reaches for some books, “the perception of people who grow – of what farmers look like, is seeded early,” she says, pointing at images in children’s stories, “it’s almost always a man, in a check shirt, standing by a big red tractor.”

She immediately laughs at her own check shirt, “OK, forget the clothing irony, Apricot’s work champions diversity, not just biodiversity. We train anyone. Young women, people from  minority ethnic groups, and men in their 50’s who thought they were too old to become growers. We also work with 16-24 year olds on the Kickstart Scheme [apprenticeships] as well as individuals on bootcamp schemes.” By turns restoring the land, by turns restoring human hearts and minds, The Apricot Centre shows people the commercial viability in small scale farming.

Walking out into the 35-acre site the Vivo team see that the land is flourishing. Impoverished soils are a legacy of intensive, monocrop and industrialised farming. Forecasts and estimates about the state of our soils vary, but it is becoming abundantly clear that farming practices must change if we are to have food security – and nutritional security - in the future.

In Britain, in the 70 years since World War 2, the RSPB reports that some areas have suffered 50% loss of hedgerow habitats. In addition, the once common site of small, mixed farms has become a rarity. Such farms were natural, abundant harbours of life. The relationship between regional livestock and local arable species naturally preserved the diversity of life in the soil. But modern practices have changed that, washing much of the life out of the soil, washing away the heritage of regional variety.

We arrive at the centre’s orchard; it lacks the abundance of the rest of the centre. “We lost our apples this year due to the unusual cold spell we had.” Rachel looks resigned. She shrugs, “The strawberries weren’t keen on the weather this year either.” Loss is not just due to the unpredictability of weather patterns, exaggerated by climate-change; sometimes it can be a result of local inhabitants - Devon deer are fond of a strawberry too.

This would be financially disastrous if the Centre’s key crop was apples or strawberries. But Rachel tells us how the diversity that’s built into their approach means that they also have success stories. The weather might be all shades of odd, but the cucumbers don’t seem to care; the crop is as healthy as ever.

On the agricultural side, the Apricot Centre teaches Permaculture Design, an approach developed in Australia in the 1970’s. It takes inspiration from nature, to maximise available resources and do away with the need for artificial fertilisers and pesticides.

It’s an approach that is echoed by the centre’s therapeutic work. Rachel describes how adopted and looked-after children can often arrive being visibly tense, shoulders tight. Just 20 minutes in nature has been shown to lower levels of our stress hormone, cortisol. But there’s more to it.

Whether it’s the impact on the mental imbalance of depression and anxiety, or in degenerative conditions such as Parkinson’s and Alzheimer’s – the so called ‘gut-brain axis’ seems to play a vital role. The interconnectedness of human health is as complex as the web of connectivity in the world around us.

Rachel recounts one girl's journey and how nature helped restore her mental health. Nature is framed as a co-therapist, providing a safe-space where the girl was, ‘held by the land’. She went on to start preparing food for herself and feeding the cows. “Natural landscapes help vulnerable people become more receptive to human therapeutic support. The mental landscape is prepared.”

There is a strong community of growers in this part of Devon, but Rachel emphasises, there’s no reason why the model cannot be replicated everywhere. “It’s not something that’s special to this south-west corner of the UK – people are doing amazing work, re-greening the desert in Jordan, or simply working more collectively with suburban gardening in America. It’s just about getting out there and trying. A balcony, a pot plant – any life – something to look after. It changes your outlook.”

Held by the land - it’s an uplifting phrase that summarises the intricate interconnections between communities, individuals and how we all move across this planet.  We say our goodbyes to Rachel and Apricot’s incredible staff –  feeling that strength reaching out across the fields.

We can support projects like the Apricot Centre because of our amazing community. It’s your money that helps create change through every Vivobarefoot purchase. Thank you for being part of the Livebarefoot journey.