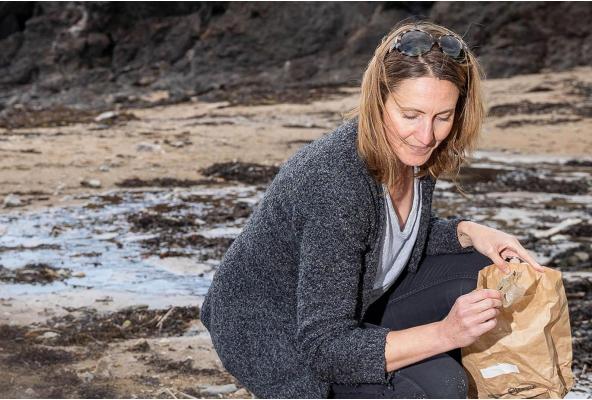 “We were so buzzing – it was an August evening, getting dusky and we got to see some of Devon’s newest wildlife in action. It was an absolute joy.”

Amanda Keetley’s energy would make anyone wish they were there, watching rewilding in action. A mother beaver had been creating a lodge, while her kits (offspring) played nearby.

The Vivo team are here in Devon to learn more about the interconnected opportunities that our Livebarefoot Fund supports. The initiatives from Devon Environment Foundation’s include rewilding wildlife safaris, regenerative farming, seaweed farming and adventure beach cleaning.

“The donations made through the Livebarefoot fund have allowed us to accelerate our plans,” says Amanda. “In our first year we supported 15 projects – these are grassroots, innovative projects of a type that often don’t meet the criteria of traditional funding channels. We fill the gap – supporting real pioneer initiatives in Devon.”

The Devon Environment Foundation (DEF) is part of a wider network of environmental foundations that fall under the banner of The Conservation Collective. Together they safeguard, protect and regenerate habitats across the globe.

DEF is part of the global Conservation Collective

Devon’s foundation is only a year old. Along with donations from the Livebarefoot Fund it receives funding from a variety of private organisations and individual donors. Rewilding is one example of the power of interconnection. These new approaches allow previously distant sectors to merge.

“There’s potential for growth in rewilding, safari type opportunities,” Amanda continues, “People are fascinated by the re-introduction of species our ancestors drove to extinction not so long ago. It shows that, in future, there will be the potential for local wildlife focused tourist activities offering unique experiences.”

The scope of these new horizons seems almost as plentiful as the less than beautiful quantities of plastic being collected by Gary Jolliffe out on Devon’s shorelines. Gary runs Till The Coast Is Clear, another unexpected hybrid where sport adventuring meets environmental service. Till The Coast is Clear is one of the 15 projects funded by DEF.

Picture: Till The Coast is Clear

If you’ve ever walked the coastal paths, you’ve probably seen the washed-up ropes and nets (ghost gear) of the fishing industry lurking in hard-to-reach coves. You might also have wondered how any of it would be retrieved.

That’s where Gary and his team of volunteers come in. Equipped with kayaks and ribs, the order of the day is to drag as much ocean pollution off secluded coves and inlets as their craft allow.

As we get kitted up in helmets and lifejackets, Gary tells us, “People often aren’t quite sure what to expect – other than they’re up for seeing something different and giving something back.” We grab the kayaks and head to the shore, “Sometimes we combine clean-up with fishing and a barbeque,” says Gary, grabbing a line, “Freshly grilled mackerel goes down a treat.”

Picture: Till The Coast Is Clear

We paddle out into south Devon’s beautiful waters, “Doesn’t sound like a great day out on paper, does it – picking ocean plastic? But the proof is in the pudding – you should see the faces at the end of the day. People are lit up – by more than just the sunset.”

Picture: Till The Coast is Clear

There’s a great sense of achievement to this strange mix of kayaking and beach clearing. And it’s certainly a new approach to cross-training. The Vivo team aren’t sure exactly what muscle groups are getting worked by yanking rope from between rocks, or how many squats they’ve done through the day. But as the bins fill up and we head back to the quay, we feel the appeal: we’ve definitely got Gary’s glow.

READ RACHEL’S BLOG
TILL THE COAST IS CLEAR
Sign In