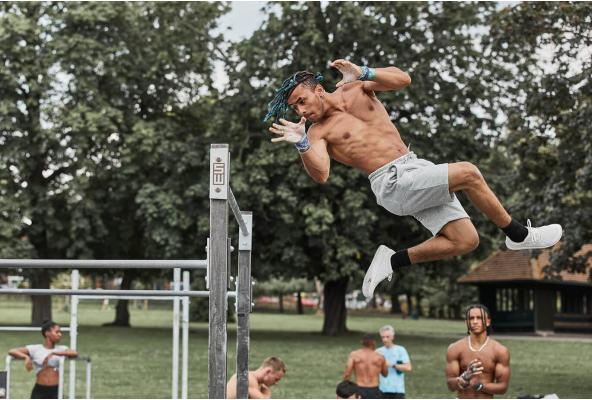 Feeling powerful, free and ambitious… Or sometimes humbled, low or fat. Calisthenics has been a pivotal force for this group of athletes, opening new paths and switching up self-confidence. The promise of their transformative tales got us headed for South London.

We’re talking freestyle, handstands, landing super 540’s… and how come our kids are doing it without us even noticing?

I started off by going to Brixton Street Gym to start training calisthenics freestyle, and the more I trained, the more I was able to learn stuff from the people around me. I got into it as a way of avoiding being bullied and a way to start building strength because I was really small when I was growing up.

I came into calisthenics only a year ago. It's the first time I ever found out anything about the sport. And in all honesty is the most positive community that I've ever found. The reason it's so positive, if I can put it down to something, it's because it's a humbling experience…

I was practising gymnastics for 9 years, and then I found the bar-park, in Spain, in my area. I jumped onto the bar and, I was like, oh my God! Yeah, it was amazing. My first move? It was, I think, a pullover, yeah - I started like that.

I've been doing calisthenics for one year and the progression has been mad. The friendships, the new relationships, it's been a crazy journey. But I got into calisthenics during lockdown, ‘cause I used to do power lifting before.

I was in the army, so, you know, I've always had a good level of fitness. And when I saw the guys doing what they do, I thought, yeah like okay, cool: I'm going to do it. And then I remember trying a front lever. And I went to do it, and my body was like, what? What happened there? And I was like, wow, that was humbling, you know.

I love handstands, because I'm flexible. All the people here say hello to other people. everybody says to me, ‘let's go Joselin’. They give me motivation to jam, to get energy. So, I think it's really important and everybody's helped me. Sometimes I feel fat, sometimes I feel good. I've been training for a long time. Rhythm gymnastics, skate, swimming pool everything. So, sport is my life. I would like to see more women in calisthenics. It's much better if we are more. I say to the women, let's go!

ANY WEIGHT, ANY SIZE, YOU CAN JUST GO TO THE BARS

When you're not doing so good, you feel ah, I don't want to carry on. But, when you're doing well and you've landed a really, really good trick, then you go home and watch that video, it makes you feel like the best person in the world.

The main thing about calisthenics is you can go to a competition and there's tricks that aren't even invented yet. It just gives you that sense of uniqueness and you don't get that with any other sport. And I feel like that needs to be broadcast more, to a lot more people, because I feel like if young people in particular could see, okay, cool, you can do a sport where you don't have to go to the gym, even if you're any weight, any size, you can just go to the bars at a park and swing.

Even if you're just swinging, like every kid, when they're growing up has done monkey bars. That’s calisthenics - it's just a much more regressed version of it.

I feel like in a lot of sports where you have to wear loads of gear, you've kind of become numb to your surroundings. Being barefoot, it's like grounding, like, you feel the energy around you. And with calisthenics cause it's outside and you're training barefoot, you become part of the environment, it's just therapeutic really.

What is special about this bar-park is that this is built by a charity called Steel Warriors. The main concept behind the charity is that they collect all the knives that get taken off the streets of London and they recycle the steel and repurpose it to build these bars that we train on.

It becomes a space that brings people of all walks of life together in the name of health and fitness, you know? You see a wide kind of variety of ethnicities, background, ages, genders, everything. It's just beautiful to see everyone come together and that's what these spaces have created.

I think the symbol behind this set up is the fact that something that normally destroys lives like a weapon, a knife, is transformed into something that ultimately builds lives.

I was working, but I felt trapped in a system that I didn't want to be in, working Monday to Friday. I'm a very active person. I've always have been. I've always been riding bikes, playing sports, flipping around. This means a lot to me. This is life changing stuff and you’ve just gotta keep pushing.

Everyone supports everyone. Someone telling me shut up and just do it, is better than someone being like, ‘oh, don't worry, you'll get it next time’. But in a weird way that pushes us to go further - we will have a way of motivating each other that we know works for that individual.

Find out more about calisthenics.

Find out more about Steel Warriors.