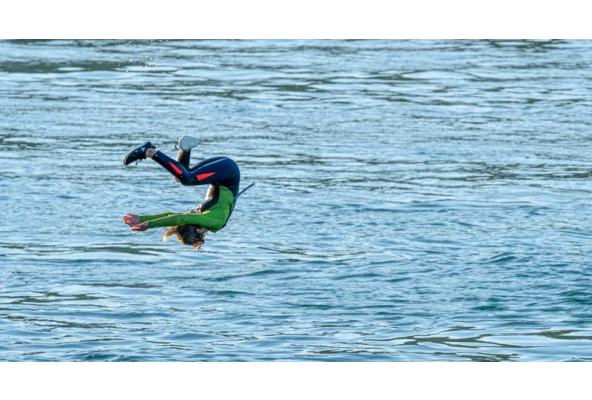 What are those little comments and asides we just keep on repeating over and over to our kids that we really need to take a step back from? Many are things we heard ourselves as kids, many are the expectations of the world around us. Either way, we think it’s time to reconsider!

Kids need dirt and germs and microbes to build a healthy immune system. Chasing around after kids with hand sanitizer and sterile wipes probably does more harm than good. According to Jack Gilbert, scientist who studies microbial ecosystems at the University of Chicago and author of Dirt is Good, parents in the affluent ‘west’ should focus on eating healthy rather than keeping kids squeaky clean.

The truth is, trying to prevent kids from falling, hurting themselves or taking risks is what’s really detrimental to their physical and mental development.

Having their abilities and decisions constantly questioned can affect kids’ confidence. Kids have an innate need to test, meet and sometimes fail the tasks they set themselves. And injury-proofing kids’ spaces isn’t the answer: there are actually more serious, ‘long bone’ accidents from kids playing on playgrounds with rubbery surfaces where kids know that falls don’t hurt as much.

Kids hear this so much – especially at school. But why? If we look at the science of how kids learn, sitting still isn’t going to help. Kids learn best through movement and play; an American high school improved test results by getting kids active right before the classes they struggled with the most. Meanwhile, a Dutch study recently found bouts of aerobic activity boosted the attention span of schoolkids, while in a large German study, just 10 minutes of playful coordination games, like bouncing two balls at the same time, improved concentration.

Remove play and according to pediatric occupational therapist Angela Hanscom, kids struggle – fidgeting, rocking in chairs, chewing pencils/hair… all signs their bodies and minds aren’t moving enough. Kids need movement and play to develop their sensory systems – which in turn will help them learn.

This is another one that kids get in schools. Is so much quiet necessary? Schools’ work and function is designed and created by and for people who were actually pretty good at it the first time round, those who were fine with all the sitting and being quiet, listening and memorizing. But not all kids are built like this. So maybe it’s time we opened up our view of how kids should be and how they learn. As most teachers will tell you, when a child gets too quiet – this is also a problem. But sometimes, it’s worth considering that if we’re constantly telling our kids to be quiet… the problem might lie elsewhere. If adults are creating a constantly noisy world of TV, radio and loud constant music - maybe the quiet needs to start with the big people!

In the old days, it used to be mainly boys who were admonished and shamed for crying. It still happens - to girls as well as boys. It’s just wrong. For babies, it’s their only way of communicating, full stop. Luckily, the old adage of leaving babies to cry to ‘teach’ them to sleep is being increasingly left in the past, where it belongs. For older kids, telling them not to cry is telling them their feelings don’t matter and that they should to hide their true emotions. This is confusing, frustrating and ultimately, harmful. Masculinity is undergoing a change, and boys especially need to know that their feelings matter too – and that burying them, or expressing them as anger or violence is not the answer.

Overly well-behaved is over-rated! When we talk about an obedient child, what we really mean is that they’re compliant to our demands and wishes, and is this a trait we really want to raise kids with?

Alison Roy, child and adolescent psychotherapist in the UK says: "A child will push boundaries if they have a secure attachment. Children who have been responded to, led to believe - in a healthy way - that their voice is valued, that all they have to do is object and action will be taken - they will push boundaries. This is healthy behaviour. Compliance? They've learned there's no point arguing because their voice isn't valued."

Our planet needs more rebels and non-conformists anyway. (But maybe don’t tell mother-in-law over Sunday lunch in the way-too-stuffy restaurant).

7. YOU'RE SO WONDERFUL AND AMAZING!!!

You might think your darling Mini Me is the best thing since matcha latte – but to raise strong, happy successful kids, they really don’t need to hear it all the time. Carol Dweck, a social and developmental psychologist at Stanford University, conducted an experiment where kids had to solve increasingly difficult puzzles, and it was the kids who weren’t heaped with praise who were more motivated to continue tackling the problems. Her research shows too much praise can actually knock kids’ confidence and their desire to complete tasks for the satisfaction they derive from the work. Praise the work and the effort instead.