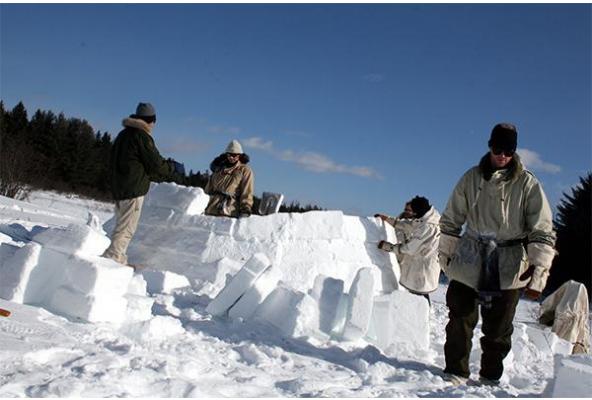 Do you want to build a snow house?

With the snow falling outside, I though I’d write a quick blog about building a snow house. Igloos are the trickiest shelters to build and should not be attempted in an emergency; they are wonderful shelters to spend time in. They are warm, roomy, and aesthetically pleasing. Plus they are lots of fun to build, especially with kids (or adults who still act like kids)!

My first night in an igloo is arguably my most memorable night I’ve spent outside; I was on a frozen lake in Oujé-Bougoumou, Quebec, Canada and it was seriously cold and windy outside. The mercury on my thermometer was just on the bottom of the glass, reading -43°C and with a strong wind blowing I’ve no idea what it was with wind-chill, my eyelashes were freezing and my eye balls actually ached from the cold. However, inside the igloo I’d just built it was comparatively warm and incredibly quiet. I recorded 0°C on the sleeping platform and amazingly +6°C by the air hole in the apex of the roof! Waking up to the blue ambient light coming through the snow blocks was a wonderful experience.

The arctic explorer Stefansson (author of the seminal text Arctic Manual) recorded similar temperatures and reported in 1912 that it can be over 60°C warmer in an igloo than outside: at –46°C outside temperature, it was -40°C in the entrance, -18°C in the entry tunnel, -6°C on the sleeping platform, +4°C at shoulder height, and +16°C degrees at the ceiling.

So… to build an igloo, get into your waterproofs, as it is hot work and you are working with frozen water. Now find or make a quarry site (you can make a quarry by stamping an area of snow and allowing it to ‘sinter’ or harden for a few hours) and then start cutting blocks, as you will need lots of them, usually about 60. Then select your shelter site and scribe a circle in the snow with a maximum diameter of about 8 feet, leaving a centre marker.

The only equipment needed to build an igloo is a snow saw. A snow saw can be improvised by carving a long wooden snow knife and dipping it repeatedly in a water hole and allowing it to glaze, so the blade slides through the snow. It is very useful to also have a shovel although it is not a necessity. Skis, snowshoes or even a metal plate can be used in its place. A common mistake with beginners is cutting blocks too small. In fact they should be so big that you can just barely carry them – 50-60cm x 40-45cm x 15cm are best.

Blocks that stand a while to sinter become stronger. Placing your blocks is an art – you get one shot at it, the more you move the blocks the more you breakdown the crystals and loose your bond. Once placed, fill in the gaps to create a more secure bond. The longer you wait, the more the snow crystals bond together.

Lay out the first flight of blocks. Cut the sides of each block so they point to the centre. Start with the biggest block, which will cover the entrance. Begin leaning the blocks inward even with the first row.

Right-handed people work left (counter clockwise), left-handers work around to the right (clockwise). In this way, the weaker hand holds the block, while the stronger one is used to trim with the saw so that the edges come together cleanly. One person needs to stay inside the igloo with a saw and a small shovel, helping place each block.

Once the first row is formed, cut a spiral from ground level of the first block until the last 4 or 5 blocks are full size. The top spiral cut must point toward the centre marker (at ground level).  Use your saw as a "sight / straightedge."

Once the spiral is created, construction continues without interruption and after two rows only the peak remains. Remember that side cuts are toward the centre. This brings the igloo progressively toward the centre, which eventually closes it.

The last block should be cut as a tapered ‘cork’ or ‘key stone’ that should initially be cut a little too large so it covers the hole. Trim it from inside so it fits the gap, gradually allowing it to settle into place. The work is done when all the gaps have been sealed.

Once the structure is complete, snow is packed into all the open joints. Top tips -

The classic tunnel entrance isn't necessary except during snowstorms. Its job is to keep snow away from the crawl-way. Keep the entrance close to the wall to avoid using up sleeping area in the igloo.

In high winds, an addition is necessary. Coarse, wind packed snow crystals and icy snow erode the igloo's walls. During a long winter storm, the blocks can disintegrate completely. A small wall about 1 meter high on the windward side solves this problem. It will protect the igloo. Even if this wall erodes, a snowdrift will have formed behind it.

The entrance should be lower than the sleeping area to create a cold sink. If using an Inuit style doorway, then a raised sleeping platform will be necessary. The simplest kind of entrance to build is when you've dug the entrance tunnel deeper and place an "A-frame" over it. For a wider entrance you may have to make a 3-block structure.

All that remains now is to smooth the inside of the ceiling with a warm gloved hand to stop any potential drip points, cut a small shelf in the wall for your candle (which should always be lit at night to detect low oxygen levels) and make a decent air vent in the ceiling near the apex (leave a stick or ski pole in the hole, so if it snow it is easy to keep open from inside. I like to have a small snow shovel in the igloo with me (just in case I need to dig myself out). Lay out your sleeping gear on the shelf, light your stove in the tunnel entrance (never cook inside in case of carbon monoxide poisoning), make a nice mug of hot chocolate (and maybe a splash of whiskey) and settle down for the evening. I hope I’ve inspired you to give it a go at some point… snow houses are lots of fun and make for a truly memorable nights sleep.