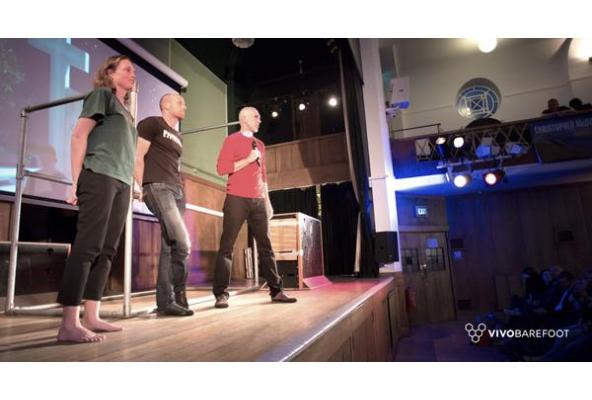 The message we took home? Get up, run around, play, eat meat, don't eat meat. Throw knives, have fun and be a Natural Born Hero!

What a night. Last night, 14th May 2015, saw VIVOBAREFOOT, Profile Books, Parkour Generations and Wild Fitness join forces with Christopher McDougall for the launch of his new book: Natural Born Hereos. If you were there we hope you all had fun last night, we most certainly did.

Galahad Clark, kicked things off and welcomed Christopher McDougall back to Conway Hall, the very same venue we hosted the Born to Run book launch over 5 years previous.

Galahad congratulated and thanked Chris on the success of his first Best Seller, Born to Run, and the impact it has had on VIVOBAREFOOT.

Chris then took the stage, reciprocating the thanks and acknowledging Galahad’s continued commitment to not just ‘selling stuff’, but relentlessly pursuing the bigger picture. He proceeded with several fascinating stories involving ordinary people found in the most extraordinary situations and reacting by doing heroic acts. There was George the Clown who helped defeat the menacing Nazi forces in Créte to name one. The true stories featuring modest folk, unwilling to take the hero status, are taken from his new book: Natural Born Heroes.

What these heroes had in common is their use of their natural strength and innate ability. Something Chris suggests most people tend not to utilise enough. Cue some awesome natural movers, the Parkour Generations crew with their spectacular performance. Using their basic apparatus they showed us how to move, how to flow.

Their leader, Dan Edwardes, then took to the stage and spoke about the amazingly successful growth of parkour in the last ten years and the increase in people taking it up. He discussed it’s importance and relevance in our society.

He said, about the night: "One of the best nights of the tour that I've been involved with so far. It's simply inspirational to meet so many people enthusiastic about movement and human potential, and great that parkour is playing such a powerful role in restoring movement to its central place in a healthy lifestyle."

The floor was then Tara Wood’s from Wild Fitness. She reiterated Dan and Chris’s message about the important societal shift to exercise that’s functional and therefore not really exercise but play and fun. Climbing trees, ropes and using the whole body. Tara said:

“What a wonderful vibe – so many connections,  lots of inspiration and it felt like we had been to a party.  A big thank you so you all"

Chris got back on stage and finished with a revelation: something more important than running. The most important innovation in human history: throwing. There’s an in-depth article about it here, that I’d recommend.  There was time for a bit of Q&A at the end and Chris, Tara and Dan covered questions from diet, barefoot running (of course) and natural movement.

Things we’re quite over yet. There were a few beers left so many stayed and chatted the evening away in Conway Hall. The bar was successfully drank dry and we have raised a significant amount of money for the Nepal Earthquate Appeal.

Thanks for everyone who showed up in their Vivos. We've probably never seen so many shoes in the same place at the same time!

"I'm still stunned by the intensity of the night. Galahad sparked things off with a wonderfully inspiring intro, and then one performer after another took the stage by storm. You could feel the excitement roiling in from the audience; they loved the parkour demo, and Dan's wit, and Tara's cleverness and charm, and they let us know it. Unforgettable."

Jamie and the VIVOBAREFOOT Team.