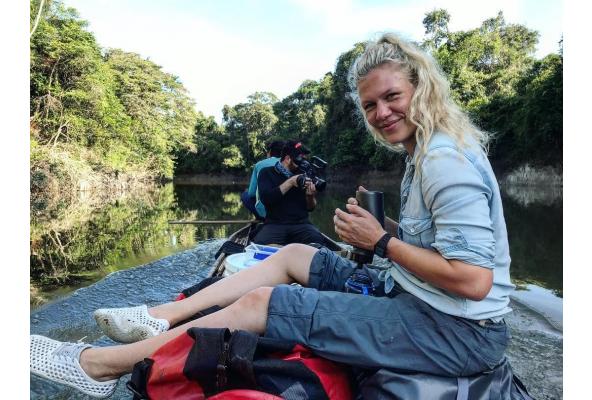 International Women’s Day has been celebrated on this date for over a century, with the first IWD observed in 1911. It’s a day dedicated to celebrating the social, economic, cultural, and political achievements of women around the globe.

Millions of people will be taking part in events to mark the occasion. Last year strikes, protests and parties were held around the world, paying tribute to women’s achievements and the ongoing fight for equality, and to raise awareness against bias.

This year’s theme is #BalanceforBetter, a call to action for gender inclusiveness and gender equality in business, politics, the media, and employment. After all, a balanced world is a better world, and everyone has a part to play.

In honour of the day, we want to celebrate the achievements of women whose experiences create moments of inspiration for us in the Vivobarefoot community.

Ness Knight is a record-breaking explorer, conservationist and ocean advocate who has completed a diverse collection of expeditions in extreme environments around the globe.

Becoming the first female in history to swim the Thames River in 2013, she has since stand up paddle-boarded over 1,000 miles down the Missouri River, cycled 2,000 miles across the USA solo and ran 15 marathons in 15 days.

She has recently been filming a documentary to showcase the work of the Flying For Rhino team in South Africa out on the frontline of the war on rhino poaching.

Catherine is the founder of the Future Footwear Foundation, developed as part of her doctoral research at the School of Arts (KASK) of University College Ghent, Belgium. It aims to promote understanding of human locomotion and sustainable by studying and working with indigenous cobblers. She has dedicated her time to living and focusing on these cobblers, from the Ju|’hoansi to the Saami artisans, and studying their craft and skill around shoes and feet to develop alternative ways to make footwear that is sustainable for environment and body.

Swimrun world champion, Vivobarefoot ambassador, and one of the fastest people on land and in water. When she is not spending her time working as a nurse or setting a world record for the World’s Highest Swimrun (at an altitude of 3914m), Maja can be found pioneering the green running sensation ‘plogging’. This is the incredible sustainable trend that involves picking up discarded rubbish whilst jogging and responsibly sorting it for recycling. The craze originated in Sweden, with Maja introducing it to us in London last year. We’ve been hooked since!

On 3rd June 2017, Laura set off on a journey to row 1,800 miles around Great Britain. This year saw her and the Row For The Ocean team compete in one of the world’s toughest rows, the Talisker Whisky Atlantic Challenge, rowing 3000 miles non-stop across the Atlantic ocean to raise awareness for single use plastic in the ocean polluting British shores (all while in Primus Lites!).

Sylvia has been at the forefront of ocean exploration for more than forty years and is one of the most important ocean advocates of our time. Leading over 100 expeditions and logging more than 7,000 hours underwater, she has an admirable ability to combine scientific credibility with her fearless mission to speak on behalf of the millions of species that depend on the ocean.

Waris Dirie is a Somali nomadic family born supermodel, Bond Girl, triathlon runner and human rights activist. After spending years working as a model and featuring in Chanel campaigns and Vogue editorials, Waris launched the Desert Flower Foundation. This global organisation was set up following the book and the film “Desert Flower” (2009) and is committed to ending the practice of female genital mutilation.