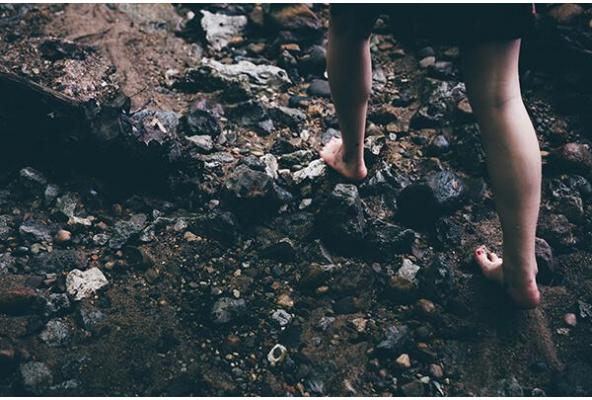 Prof Dan Lieberman, chair of the Department of Human Evolutionary Biology at Harvard recently published research in the US science journal, Nature (June 2019), about the effect calluses have on the sensitivity of bare feet.

He noticed as he spent more time barefoot his feet developed calluses which protected his feet from injury, but he wondered if his feet were losing sensitivity as a result. With a team from Germany and Kenya, they have concluded that despite calluses thickening with increased time spent barefoot, this does not lead to a reduction in the sensitivity of the foot.

They found the hard surface of the callus still transmits mechanical stimuli into the nerves inside the skin equally well as an un-callused, or unprotected sole.

The difference between what happens when a foot strikes the ground in a cushioned shoe is that the impact is more ‘comfortable’ because of the stiffness of the shoe’s sole slows down the rate at which the body hits the ground, but the impact on the body is still the same. As Lieberman puts it, “the energy that gets shot up your leg is about three times bigger in a cushioned shoe than if you’re barefoot,” although he adds that we still “have no idea what that means” for overall joint health.

In theory, this extra impact could possibly explain why rates of arthritic knees have doubled since World War II, about the time when footwear design began including some level of cushioning, but there is no solid evidence yet to support this link.

A callused foot isn’t ever going to create the level of ‘cushioning’ of a traditional shoe, but it can simply make barefoot movement easier without losing the vital sensory feedback we have between feet and our brains.

Harvard evolutionary biologist Daniel E. Lieberman is also famous for his seminal paper, published 10 years ago, showing that people who run in cushioned shoes hit the ground harder than those who are regularly unshod or wearing minimalist shoes.

He concluded a mid-to-forefront gait – instead of heel striking - may protect the feet and lower limbs from impact injuries and, most importantly, was the more common foot-strike pattern among people who run barefoot or in minimalist shoes.

This could explain why, despite most modern running shoes adding more technology to their construction over the previous thirty years, these shoes weren’t actually helping prevent injuries.

In short, running injuries might be more about gait than shoe, but shoes might also allow for, or even encourage, the running patterns that make us more injury-prone in the first place. In the running world, it was pretty controversial stuff.

But this more efficient, ‘barefoot’ style of running is, after all, how our ancestors ran for tens of thousands of years; in bare feet or in minimal foot-covers or thin, sandal-type shoes which protected only from climate and tough terrains.

This was the subject of Lieberman’s seminal 2004 work Born to Run, where he and his team concluded that humans are natural runners and that our ability to run may be key to our evolution.

So, embrace the callus and let your feet grow wild and barefoot!